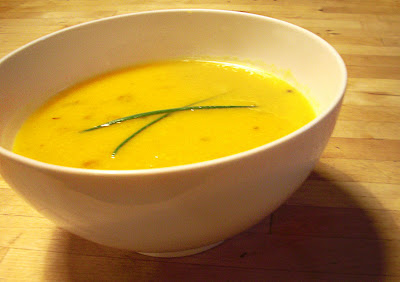 You know sometimes you just get it right? I wanted to make butternut squash soup and for some reason decided to use lentils to pad it out instead of potatoes or whatever. I go through phases of having cravings for rice and dal, and making industrial quantities of both, so it made sense to me to make this soup in the way that I would make dal: cooking the onions and spices separately and adding everything together at the end. I seriously hit on a winner. It looks beautiful as all the ingredients are yellow and the turmeric just increases the intense colour. Also, this was the tastiest soup ever (not counting my Nana's chicken soup, which I will blog come winter). Fenugreek and Asa foetida are new spices for me, I added them on Lu's recommendation, you could leave them out but I think they really gave it an extra kick and an authentically indian flavour. I don't think I will ever make butternut squash soup any other way again.
Ingredients:
1 butternut squash
200 grams red or yellow lentils (I used a mix of both)
1 onion
4 cloves garlic
3/4 pint vegetable stock
4 tablespoons Ghee (or 3 tblsp veg oil, 2 tbsps butter, but flavour will not be as good)
2 teaspoons cumin seeds
2 teaspoons coriander seeds
1 teaspoon turmeric
1 3cm thick slice of ginger
1/2 teaspoon cumin powder
1/2 teaspoon chilli powder
1/4 teaspoon fenugreek powder
1/4 teaspoon asa foetida powder
Begin by cutting the squash in half, removing the seeds, and placing an unpeeled clove of garlic into each of the cavities. Sprinkle with oil and season, and roast in a very hot oven for about 3/4 of an hour or until soft enough to scoop the flesh out with a spoon. Meanwhile,
wash the lentils well, place in a pot, cover and simmer them in about 3 times as much water along with the turmeric and ginger.
When the lentils are totally soft, discard the ginger. Remove the cooked squash from the oven, scoop out all the flesh and add it to the pot with the lentils and their remaining cooking water. Peel the roasted garlic cloves and add them in too. pour in the hot vegetable stock (you might not need the full amount of stock, depending on how much of the cooking water evaporated when you were cooking the lentils. It also depends on how thick you like your soup. I prefer mine a little on the thin side) Using a hand held stick blender, whizz up the lentil and squash mixture until it is smooth
Finely chop your onion and the two remaining garlic cloves. Heat the ghee in a small pan until really hot. Add the seeds first, and remove from the heat. They will darken and fill the kitchen with a wonderful aroma. Then add the rest of the spices, followed by the onion and garlic. Cover the pot and gently saute the mixture until the onions are totally soft.
Bring the soup mixture to simmering point, and add the hot onions and spices infused oil. Stir until everything is incorporated, and serve.
Posted by L

Just made this, absolutely delicious. One observation, when you roast the squash it's hard to seperate the skin from the flesh. I gave up and blended the lot, worked out fine.

Hi Sean - so glad you liked it! I normally spend a while scooping out the flesh with a spoon and then it falls apart, I kept going cause I presumed I had to! Next time I might just whack it all in then - extra fibre! Thanks for your feedback
Lu