Tweet
A lovely Pie for the 4th of July! 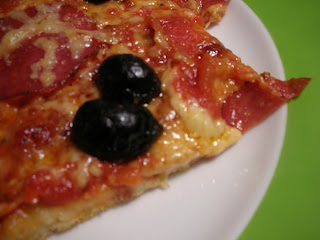 Its the 4th of July! I wanted to celebrate and what could be more american that Pizza!?
Ok, I know i should have gone for burgers or something, but after spending time in New York, I came to the conclusion that it was the Americans, not the Italians, who actually invented this dish.
This was my first ever attempt at making it, but I like to think Im a bit of a dab hand at baking with yeast, so I was looking forward to the challenge. Unfortunately, my photos didn't come out too well, and Lucy is off in France so I cant get her to work her designer's magic on them. Maybe we will update them when she gets back... anyway, the most important thing was that this tasted AMAZING and was a big hit with Colm, who pretty much lives on Pizza. 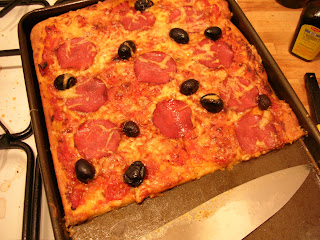 Thanks to Sarah's Mum, who unknowingly provided the recipe for the dough, but I halved it as there were only two of us. The quantities below will make one large pizza (or two small ones)
Pizza Dough
8 oz strong white flour ( or you could use half white, half wholemeal)
1 level teaspoon sugar
1 level teaspoon salt
1 egg
4 fl oz warm water
1 sachet easy blend yeast.
Blend all the dry ingredients in your food processor. Add the egg and warm water and mix using a dough hook. Keep the mixer on until the dough in soft and silky (alternatively knead it for about 10 mins until you get the same effect). Leave the dough in an oiled bowl, covered in cling film in a warm place until it had doubled in size.
while its rising make the sauce:
Tomato sauce:
1 tin chopped tomatoes
1 clove of garlic, chopped finely
2 tbsps tomato puree
2 tsps oregano
Saute the garlic in some olive oil in a frying pan. Add the tomatoes, puree and oregano and simmer until the whole thing is reduced and thick.
Knock the dough down. You dont need to rise it a second time, but you could leave it in the fridge at this point for use later, which is what I did as Colm was running late!
Roll the dough out on a floured board and manipulate until it is about 1/4 and inch thick and the right size for your oven tray (I used a large rectangular one but you could use one of those round pizza tins). Make sure the tray is well greased with olive oil before you do this. If you like a thinner base you could do two and roll it out as thin as you can without making holes.
Spread the sauce over the dough and top with whatever you like best on a pizza. We did Cheddar cheese (because I couldn't get any mozzerella in the local centra) salami and black olives. Drizzle some olive oil over the whole thing and pop into a very hot oven for 10-15 mins. 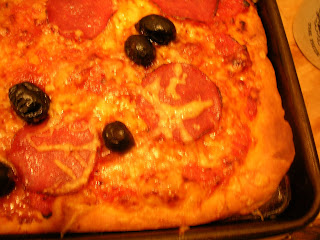 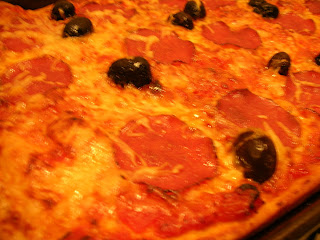