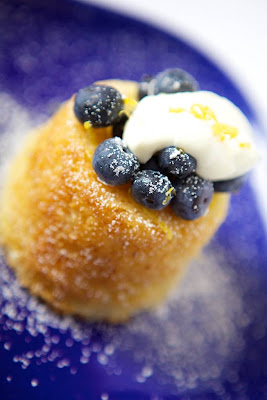 I found this wonderful recipe for Lemon Cake on Sasasunakku blog. It's a lovely witty blog - with some great recipes, this is the first one I've tried and it was amazing. Thanks for letting me use your recipe on the blog Sasa. There is a large amount of yogurt in the cake - making it wonderfully moist, and relatively good for you! Hurray. I made it in some little ramekins - and they popped out small and cute. I followed her quantities and it made 5 large portions (I'm greedy!) I used Glenisk Greek yogurt, I doubt you can use low-fat yogurt, but don't take my word for it. 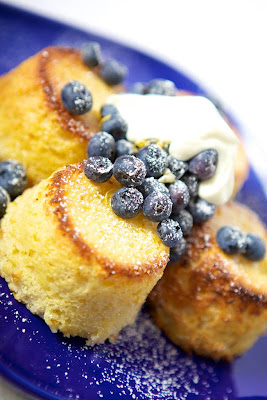 Thanks to the lovely Des Moriarty for the great pictures! Aren't they amazing?? We had a fun day of food photography over in my kitchen. Think we got some beautiful and delicious shots. Check out his other work here. I'm putting my neck out here - but I think I prefer lemon cake to chocolate cake ..... what d'ya reckon? 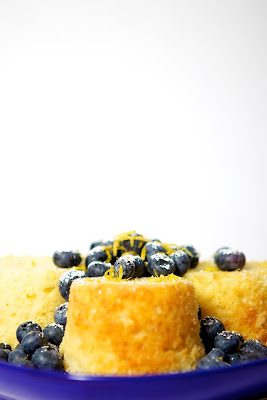 Moroccan Lamb with Prunes, in a harissa spiced squash with pomegrante bulgur and mint yogurt 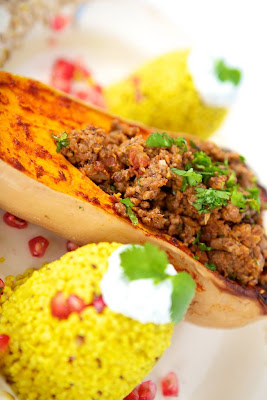 Here it is! In all it's glory, what I have strangely decided to call my signature dish, though I've never cooked it before. I'm delighted with how it's turned out, I just hope that enough people vote me though so I can get to cook it for the judges in the final...... Fingers crossed! If you're not familiar with Cheffactor, Cully and Sully are offering the winner a 12 week cookery course at Ballymaloe Cookery School - so if you haven't voted yet click here and give me your seal of approval. Thanks - I really appreciate it.
A big thanks to the lovely and talented Des Moriarty for taking these pictures. Head on over here to see some more of his work. 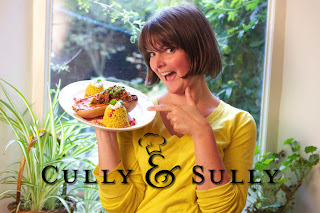 So I have no idea where I came up with this recipe from - possibly an amalgamation of many things - Tagine, Halloween, squashes and the season that's in it.
Serves 6-8
For the meat
1.5 lbs of fresh minced Irish lamb - I use FX Buckley's on Moore Street
6 shallots - finely sliced
3 cloves of garlic - minced
thumb sized piece of ginger grated
1 teaspoon of cumin seeds
1 teaspoon of coriander seed
1 tablespoon of smoked paprika
2 teaspoon of cinnamon
3 tablespoons of toasted pine nuts
small bunch coriander - chopped
1 tin of tomatoes
2 tablespoons of of tomato puree
2 handfuls of prunes - roughly chopped
For the squash
2 butternut squashes - halved - seeds removed
Harissa paste - 1/2 teaspoon for each half
For the bulgur wheat
2 cup of bulgur
4 cups chicken stock
1 red onion - finely chopped
7/8 stamens of saffron
A big pinch of sumac
2 big pinches of turmeric
2 teaspoons of mustard seeds (I used black)
1 pomegranate - seeds removed
For the dressing
6 tablespoons of plain yogurt (I used Glenisk - cause it's gorgeous and Irish!)
1 big handful of fresh mint leaves 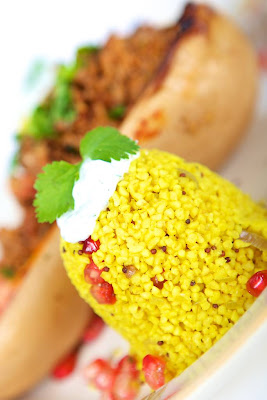 First half and de-seed the squashes. Retain the seeds if you want to make a tasty snack by roasting them in the over - recipe to follow. Rub a little olive oil over them and pop into a pre-heated oven at Gas mark 7.
Put the saffron seeds into a bowl with a teaspoon of bowling water -  crush gentle to release the flavour and colour. Bring 2 cups of stock to the boil. Add the bulghur wheat to the saffron and combine. Next pour over the stock. Cover with cling film and allow to sit for 30 minutes to cook.
Then dry fry the cumin and coriander in a hot pan until you start to release their flavours - you'll smell it! Then remove to a pestle and mortar and give them good bash. Then fry the shallots in a little olive oil, after a few minutes add in the garlic, after another few minutes add in the minced ginger and cook until soft. Stir in the cumin and coriander. Then add in the meat. Cook this until it's browned. Stir in the paprika, cinnamon, tomato puree and tin of tomatoes. Give a good stir, then add in the prunes and pine nuts. Bring to a gentle simmer and cook covered for 25 minutes.
Remove squashes from the oven when the meat is ready. Remove a scoop or two of the flesh to make the hole bigger. Smear over the cut side - the harissa paste. Stir the coriander into the meat and then pop into the squash. Put this in the oven and bake at gas mark 5 for approx 20 minutes. Until the top of the squash is becoming a rich deep brown.
While this is in the oven prepare the bulgur wheat. Fry the onion in a little oil until soft. Stir in the turmeric, mustard seeds, and sumac. Then stir in the cook bulgur wheat, and gently heat it through. 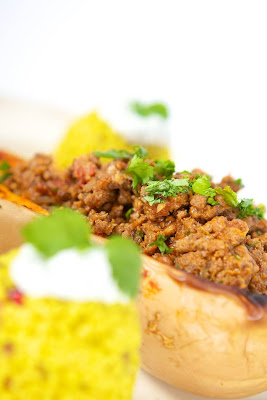 Remove squashes form the oven. Just before you serve - remove from bulgur from the heat and stir in the pomegranate seeds, they'll loose their nice jewel colour with heat. I used a small coffee cup to make this into pretty mounds, and served alongside the cooked squash and drizzled yogurt sauce. Serve some more of the dressing in a side dish should anyone want more.
Thanks for reading and for voting, I really appreciate everyone's help on this. I lost my job last week so this would just be an amazing opportunity to become and amazingly accomplished chef (that last bit is called the sob-factor!)
Lucy xx
Posted by Lu 2 comments