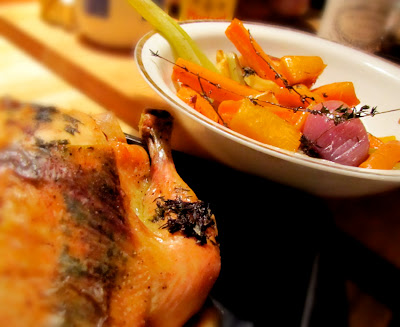 Trying to look like we were just having a casual conversation instead of gossiping in work, me and Stephen started talking about the best way to roast a chicken. His suggestion sounded fresh with a touch of spring, so I gave it a shot!

This recipe comes from Stephen but possibly he thinks via Jamie Oliver - but I might give Stephen credit. It’s a really wonderful dish.

Stephen is the namesake for Stephen my canary - so if you haven’t met him already here a photo of his cute little yellow self. He was found by Stephen M, who was working late, one cold Sunday evening in May. He was hopping up Pearse Street, cold and lost. He opened the door of our office and in he came where he revived well and I adopted him the next day. Seems strange to put a photo of him in the same post as a roast chicken recipe, oh well! He eats boiled eggs so it’s the same thing really! 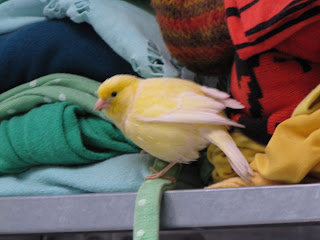 Wash the chicken inside and out - then pat dry. Pre-heat your oven to Gas mark 5. Peel your veg and chop into large chunks . Put into a large baking dish along with a good grind of black pepper, some salt and a few sprigs of thyme.

Make the herb butter by combining the zest of the lemon with the butter and 3 tablespoons of fresh thyme. Then gently press the butter in between the skin and the top of the breast - the skin needs a small amount of convincing.

Place the chicken on top of your bed of vegetables - give the outside of the chicken a little seasoning also. Cover the whole thing in tin foil, then cook in the middle of the oven for 2 hours.

Remove the tinfoil, drain away the excess juice and retain for gravy later. Pop back in the oven for another 30 mins to brown and allow the skin to crisp.

After 30 mins - remove chicken and allow to rest for 10-15 minutes, while the meat is resting take the veg to the top shelf of the oven and crank up the heat to gas mark 8/9 to get a nice crisp finish to your root veg.

Prepare the gravy - in the roasting tin, throw a large dash of sherry, scrape of all the nice juicy bits with your wooden spoon. Then mix in one heaped tablespoon of plain flour. Mix well so that it forms a paste with the sherry. Then the juices from the chicken that you removed earlier would have separated. Drain off the excess fat from the top, then stir the juices into your flour mixture a little at a time, until well incorporated, continue doing this until you have a nice thick gravy. Check the seasoning.

Then carve your chicken, a good sharp carving knife is always good to have around. Serve on a bed of roasted veg drizzled with gravy, the lemon. A fresh and subtle lemon flavor will be throughout the meat and gravy, the edges of your veg will be caramelised and crispy - wonderful! The butter above the breast made it fantastically moist and tasty. 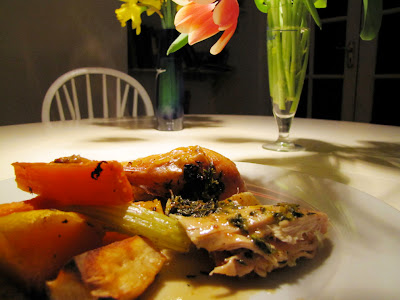 Thanks Stephen, Lola declared it - the best roast chicken she’s ever had
Posted by Lu

Yum - and look at Stephen the canary CUTE! Hope he liked the latest podcast :)