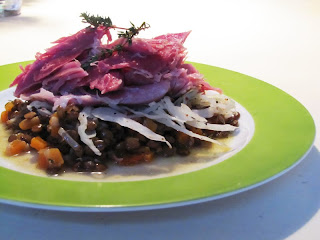 Lu has been talking about cooking ham hocks for weeks now. I have been seeing them in butchers windows for around €1 each so I thought it would be a challenge to figure out what on earth to do with them. I couldn't find any recipes for what I had in mind. On Mothers day we went for lunch in The Arch in Churchtown, and I had the tenderest shreds of ham hock with lentils and lambs lettuce and a piece of crisp pancetta for a starter and it was oh so delish. This recipe does not quite make the grade, its not nearly as refined as they managed to make it in the Arch, but its cheap, easy and delicious in a much more down to earth way.

Ingredients
2 ham hocks
200 grams green or puy lentils
1 large onion
2 cloves garlic
2 sticks celery
2 carrots
1 bay leaf
1 tbsps fresh thyme leaves
water
Begin by steeping the ham hocks in water overnight for at least 12 hours to get rid of some of the saltiness. Then in a big pot with a lid, cover them with fresh cold water and bring them to the boil. When the water has begun to boil, drain it and cover again with fresh cold water. Bring this to the boil and simmer continually for about 2 hours.
Preheat the oven to 250c
Chop the onions finely and dice the other vegetables. Drain the ham hocks and reserve some of the cooking liquid (about a pint) Fry the onion, chopped garlic and thyme in the same pot you used to boil the ham hocks (just needs to be big enough to fit everything and have a tight fitting lid). Then add the chopped vegetables and cook for a minute, followed by the lentils and bay leaf. Cover this with a mixture of water and the cooking liquid until you have covered everything by about an inch of liquid. Add the ham hocks and cover with tin foil and the lid, and place in the oven for 1 hour and 30 mins. Check every half and hour in case the liquid is running low, you don't want it to go dry!
When cooked, the meat should be falling away from the bones. serve with the lentils and some cabbage.
You can use any leftovers to make a delicious lentil soup with ham!
Yum yum pigs.... foot? 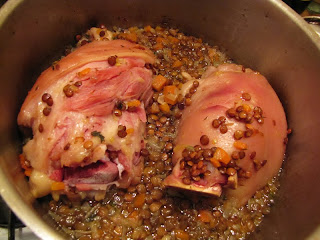 Oh, so that's what ham hocks are? Like ham drumsticks???? I'm sure they're yummy. Thanks for teaching me something new

Looks good ladies! Might give it a go and report back :)

so very yum! Don't forget to soak the hocks first though

Thanks for the comments all, yes this one is definitely worth a try. Do it now before the weather gets too warm for this type of wintery comfort food!

That looks good enough to tempt me away from my evil almost vegetarian ways!

Hey Jesso - I wouldn't want to be responsible for that now!!