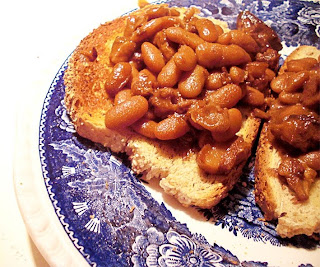 I would regard this recipe as a semi-fail, as I wasn't too keen on it but Lu and Sarah both really liked it and ate it all up.
I think if I was making it again I would not use belly pork as its just too fatty for me. Yuck, whole bits of fat floating around in your beans = Not nice. I might use sausages instead (a la cake cafe) and add them halfway through the cooking time rather than at the beginning. Also, I don't think I would add so much sugar. It was just too sweet with sugar and treacle. I would probably just use some tomatoes instead of sugar and see how that worked out.

Another reason these beans were not as good as they could have been was because I forgot to buy the proper type - haricots- and had to make do with white kidney beans. I think these are a more robust variety, so they didn't go as mushy as would be required by me of a bean.
Oh the complaints! I guess I was just a little disappointed as my bean standards are so high, I had been wanting to try making this ever since I had a eureka moment at the cake cafe as to how amazing home made vs batchelors!
Anyway, here is the recipe, by Hugh Fernley Wittingstall. Sorry Hugh. must try harder. Also, this recipe says to cook for 4 hours but mine took at least 5, maybe 5 1/2. Again this could be down to using the wrong type of bean. Bah.
I might try this again some time but it takes a whole day so maybe a tin is the way to go after all.
Posted by L