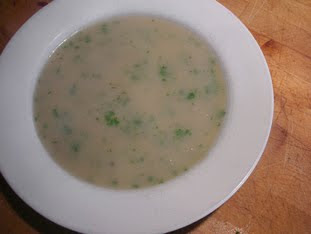 I have been pretty remiss with the posting lately... Lu has been doing most of the blog work. I've been on a diet ever since the total blow out of New York so have not been cooking or baking to my usual standard. Anyway I'm kinda getting back into it now, and since the weather is getting colder, I'm going to share the recipe for a lovely and quite unusual soup, along the lines of leek and potato but including the lovely, peppery taste of Lovage.
I think Lovage is a herb, My mum grew a load of it this summer in her garden and didn't quite know what to do with it at first. Actually, wikipedia tells me its not a herb but is related to the celery family. I used it like this:
Potato and Lovage Soup.
Ingredients
1 large bunch lovage
4 large spuds
4 sticks celery
2 white onions
4 cloves garlic
1L good veg or chicken stock.
salt & pepper
Chop up the potatoes into inch sized cubes, finely chop the lovage leaves (not the stalks), onions, celery and garlic. Chop everything, actually.
Sweat the onions and garlic in a large saucepan until they are well softened. Add the celery and cook another 4 mins. Add the potatoes and cover them with the stock (you might not need to use all the stock, it should cover the potatoes by about an inch).
Simmer the mixture for about 15 mins, until the potatoes are soft all the way through. Then add half of the lovage and simmer another 3 or 4 mins. Using a stick blender (my favorite kitchen tool!) whizz everything up until its smooth. Then add the remaining lovage and season with the salt and pepper to taste.
Serve. Delicious & healthy and filling enough for my dinner. No more massive New York dinners for me, oh no!
Posted by L