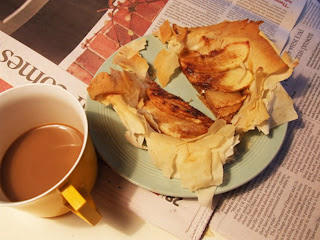 I had a yen to make Parisian apple tartlets like these, but unfortunately, once again I couldn't find any ready made puff pasty in the whole of the Dublin 7 area (ok, I tried 3 shops and gave up). You may remember that we had a similar problem back in August when we were making the Beef and Guiness pie, and I actually had to go to effort of making my own! It turned out ok, but as all my tv cooking heroes (Nigel, Nigela, and Jamie) say, its not worth making your own puff, as the bought stuff is always going to be better. Anyway, Its a Sunday afternoon, and the less palaver involved the better.
Once again to the rescue came our local middle eastern shop Alauras. It stocks frozen filo, which can be used to make baklava (I will have to try it one of these days) and Lucy's famous home made jambons, (another improvised recipe which called for puff pastry but had to settle for filo) Using frozen ready made pastry means that these tarts are so quick and easy to make, and if you actually use puff pastry then you don't have to bother with all the brushing of melted butter. Just pop the sugar and apple on top of the pastry, and bake!
On reflection, I think I would actually prefer the filo version. These tarts were crunchy, melty, delicious. Perfect with a cup of coffee and the Sunday papers! 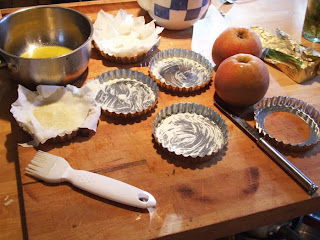 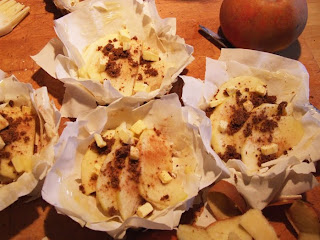 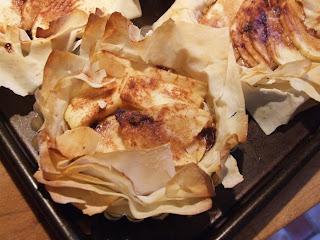 Ingredients:
Frozen filo pastry, defrosted
4 oz butter
1 large apple (2 small) such as coxs or braeburn
2 oz brown sugar
ground cinnamon
Start by melting half of the butter in a pan. Brush 6 individual tartlet cases with some of the butter. (If you don't have cases, you can just layer the pastry up in tart-sized squares on a buttered baking tray. This is what you would do if you were using puff pastry, too)
Layer the pastry, one sheet a a time into the cases, brushing each of the pastry sheets with the melted butter as you go. There should be 5 or 6 layers of pastry in each tart. Press the pastry in to the tins and leave the excess corners sticking out (I think they look lovely like that). Brush the top layer of pastry all over with the butter. Sprinkle some of the brown sugar into each of the buttered pastry cases.
Peel and core the apple, cut into quarters and slice very thinly. Arrange the apple slices in a fan shape in each of the pastry cases, and sprinkle with the remaining brown sugar and a pinch of cinnamon on each. Cut the remaining butter into tiny cubes and sprinkle these over the apple and sugar.
Bake for about 15 minutes in a preheated oven at about 180c. You want the apple to be cooked and tender, the sugar melted, but the pastry not over cooked or burned.
Posted by L

If you make Baklava can I come around and have one??! It's my very favourite desert!

I meant "dessert". My favrouite desert is the Gobi.

Great mine is the Nubian desert. And yes to Baklava - Rayne wrote this so now she owes us, mmm honey