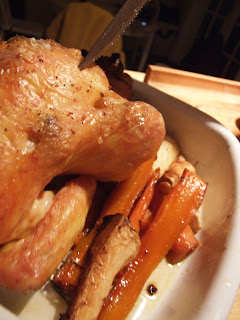 It was a Saturday afternoon. Lu and I were very much looking forward to a certain television show that will remain nameless, but for convenience I will code name 'The Y Element' (say no more, its shameful, I know), both our respective boyfriends were coming over and in a snap inspired decision we knew that a traditional roast was the order of the day. 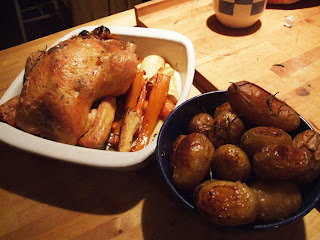 This was the easiest ever to make, as we just stuffed it, surrounded it with vegetables, shoved the whole thing in the oven and repaired to the local for a few well deserved pre-prandial Guinnesses. We returned to a house that smelled amazing, made some gravy and were all sat down in front of the fire and the box by 8pm.
I'm going to go through it step by step, starting with the stuffing. A long post but worth it! 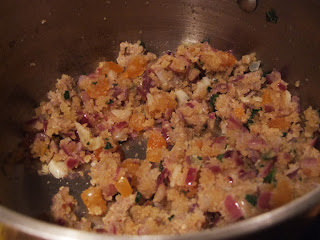 Stuffing ingredients:
1 red onion
4 cloves garlic
A few sprigs fresh sage
2/3 pack of breadcrumbs
3 oz butter
about 10 dried apricots
1/2 a Clonakilty white pudding
Begin by chopping the onion, garlic and sage. melt the butter in a saucepan and add the onion and garlic. Cover and sweat until they are soft and translucent. add the sage and breadcrumbs and mix well so that the butter soaks in to the crumbs. If you need more butter of crumbs, now is the time. Finely chop the apricots and mix them in. Then slice and crumble the white pudding and mix this in too. Allow to cool for about 15 mins and use to stuff your chicken.
Chicken prep:
Drizzle olive oil on the bird and sprinkle with salt. Then rub the salt well into the skin. This will make sure it is lovely and crisp. Slice 3 cloves of garlic in half lengthwise. Use the point of a knife to make 6 slits in the skin of the chicken, and push the garlic slivers in underneath the skin.
Veggies:
We used carrots, parsnips and new potatoes (which we didn't bother to peel).
Peel the parsnips and carrots and cut them into long pieces of roughly the same size. Get your roomiest roasting dish and drizzle it with olive oil. In the middle of the dish, build a sort of platform of parsnips and carrots, and place the chicken on top of this. Scatter the remaining veg, including the new potatoes (or peeled old potatoes, cut into smaller pieces).
Place the whole thing in the oven at 190c for 1 1/2 -2 hours, or until the skin is golden brown and crispy and the juices run clear when you poke a skewer in under the chicken's leg
Gravy:
At this point, take the chicken out and place it in a different dish. Ditto the veg. Put it back into a very low oven to keep it warm while you make the gravy.
Cook up whatever green veg you are using (Broccoli is my personal fave) and reserve to cooking water. Place your roasting tray which you used to cook the chicken onto a low heat on your stove. Sprinkle 2 tbsps flour into the pan juices and stir it around until its all mixed together with the juices, little burned bits, stray pieces of garlic and escaped stuffing. All of this will make your gravy more delish. add some of the water from the veg, and a good glug of white or red wine. Bring to a simmer and stir until it has thickened. I prefer my gravy to be nice an light and thin rather than gloopy and brown like Bisto. If you need to get more flavour in to the gravy, you can add half a chicken stock cube, a few drops of Worcester or soy sauce, and of course, salt and pepper.
Carve your bird and serve!
I love to use the carcass of the chicken to make a gorgeous roast chicken broth. Recipe to follow in next post!
Posted by L