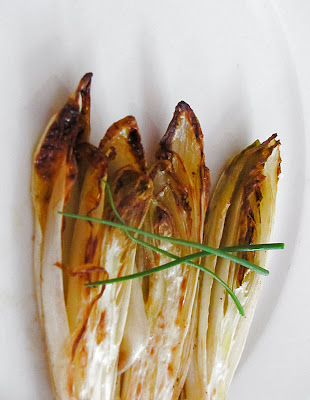 While wandering around the Temple Bar Food Market on Saturday, I browsing through a selection of oils, when I came across a small bottle of cumin oil. Cumin is one of my favourite spices, so I was intrigued immediately. The friendly guy running the store seemed pleased I'd picked it up - as they had just got it in as new stock. He had given it to some food critics to sample duriing the week and said they'd been impressed. If it's good enough for the critics well then. I was a little scared when he described it as medicinal, though he assured me it was fine for cooking.
I paired it with some grilled endive - and let the few drops I applied do the talking.
Ingredients
3 heads of Endive/Chicory
a drizzle of olive oil
Salt and Pepper
3 drops of cumin oil per piece of endive
3/4 teaspoon of dark brown sugar
Lay the head of endive on your grill pan - drizzle with olive oil, add the drop of cumin oil and season well. Sprinkle over a little sugar. Pop under a hot grill for 10 minutes, turning once, the heads should be a rich caremlised brown on the edges, soft through witha little bit left in the centre. 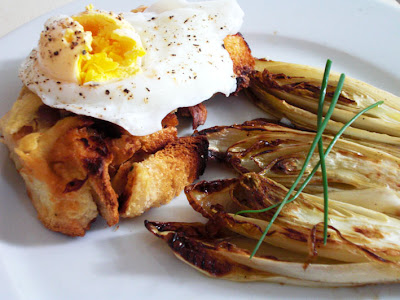 I served these with some leek and bread pudding, and topped with a poached egg - delicious! There was a camera emergency while I was trying to cook this causing me to over cook the egg - damn - was still good though. Recipe for leek bread pudding to follow - now I'm going to bed!
Posted by Lu

thanks Alex
Ktpi - must be me new gorilla pod

I really want to try this, looks absolutely fab. I've never had Endives really so I might make it for my tea tomorrow. Not sure if I'll be able to squeeze in making the bread and butter pud tho!

And your egg doesn't look TOO overcooked - although it is really nice when you get a river of yolk going all over the place :)

Aoife - yeah they're nice alright - a little bitter - I do like a runny yolk - I will! buy myself a novelty egg timer