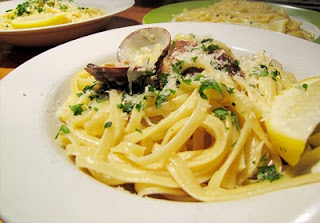 I can't believe how long I have left it to blog this recipe! This was the main course at the dinner party we had back in August and its now November, shame on me! Lucy has been holding the fort on the blog front recently as I seem to be going through a cooking drought, and have, embarrassingly, cooked a number of things recently that were NOT Delicious!
However,
this recipe definitely is not one of those. This was perhaps one of the most delicious things I have cooked with pasta and I think blogging it now might help me get my food-mojo back! Onwards and upwards!
Recent Clam related activity: I was in California in September and when in San Francisco sampled their famous clam chowder served in a sourdough bread bowl. The bowl was not really my thing, but the chowder was spectacular. Then in Monterey I ate 'steamers', a bowl of steamed clams, which made me want to cook with clams again and reminded me that I still had not blogged this recipe. I also like saying the word 'clams' in an American accent... 'Claaaaaaaayms'... oh the hilarity!


Clam linguine (Serves 10!)
Ingredients
1kg fresh clams ( i got ours at Kish fish near Smithfield)
10 shallots, finely chopped
white wine
6 cloves garlic, finely chopped
500ml cream
100 grams butter
glug olive oil
juice of 1 lemon
enough linguine (i used a packet and a half!!)
Parmesan cheese
freshly chopped parsley
Melt the butter along with the olive oil in a large pot. Add the shallots and garlic to the butter, cover and saute for about 10 mins or until soft and translucent. Meanwhile, start cooking your linguine. add the (washed) clams to the shallots and pour in 2 wine glasses of white wine. Simmer for 5 -8 minutes or until all of the clams have opened. If there are any that have not opened, throw them away as they could make you and your guests sick (I was a bit paranoid about this happening!). Add the lemon juice at this point. When the linguine is cooked, drain it but reserve 1 cup of the cooking liquid. Add the cooked linguine into the pot with the clams and mix it well. If it looks a bit to dry or starts to stick together add a little of the cooking water from the linguine. Garnish with chopped parsley and some lemon wedges but serve the Parmesan on the side as there is a school of thought that says Parmesan should not be served with seafood pasta dishes, weird huh?


This was absolutely delicious and went down a storm with our 10 guests. Its also nice for the 'stick a pot on the table and let everyone dig in' style of dinner parties.
Posted by L

Hi there, this sounds delicious! I was wondering if it would work if I halved the quantities (I have never cooked clams before and am slightly wary of poisoning people!) Also do you keep the lid on while cooking the clams? Thanks a million! (off to bake the lemon cake too!)

Hi Jenny - this would def work with half quantities, it was a big group we were feeding. I popped the lid on when the clams were cooking for a minute or two. Once they're open they're fine. Try to buy them on the day your cooking them and I'm sure there'll be no poisoning! Let me know how you get on with the lemon cake - it's a winner!

Hi Jenny, yes sorry, when writing this recipe i forgot to say that you should cover the clams with a lid while they are cooking.... whoops!
Lola