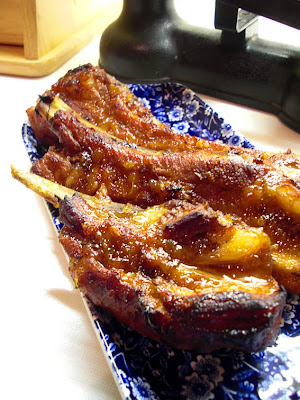 At a Halloween party we had as a kid, my mum made barbecued spare ribs and called them skeletons bones. It being that time of year again I got a craving for slow roasted pork covered in sweet sticky dark sauce.
This recipe is far enough from perfect - not an ideal way to cook your ribs but it worked out well, so I'll share it and make recommendations after? Is that allowed?
Ingredients
8 spare ribs
Marinade
1.5 teaspoons of caraway seeds
2 serving spoons of Sherry Vinegar
1.5 serving spoons of olive oil
1 serving spoon of soy sauce
1 tablespoon of honey
1 teaspoon of honey
1 teaspoon of crushed chillies
3 serving spoons of ketchup
6 cloves
2 cloves of garlic crushed

Combine all the ingredients in a bowl. Toss the ribs well. Cover and refrigerate for 1-8 hours - however long you have, but the longer the better I suspect.
Preheat your oven to 200. Put your ribs into a large oven proof dish and put on the lid or cover with kitchen foil. After half and hour reduce the heat to 160. After a further half hour remove from the oven and take off the lid.

Now here's where it gets a bit odd. The ribs were cooking but were half submerged in liquid and a little fat - so I quickly poured this away (into a bowl no the sink - promise!) i decided to whip together a quick glaze so that they'd be nice and crispy and browned on the outside in half an hour. So I combined.....

1 dessertspoon of honey
1 dessertspoon of sweet chili sauce
1 teaspoon of honey
I smeared this over the ribs - and in half an hour - they looked great - well cooked meat - not falling off the bone - but more than ready to part company - if persuaded. We served them with some steaming hot baked potatoes and braised red cabbage - delicious! Very high in salt, so don't eat them everyday and you shouldn't die.

Doing this again I'm not sure what to change, the original marinade imparted a great depth of flavour - particularly the caraway seeds - so this method is messy but damn tasty. Fooled you I'm not making any recommendations - these were divine
Posted by Lu

i can't imagine the caraway seed flavour so i may just have to make these myself! YUM!