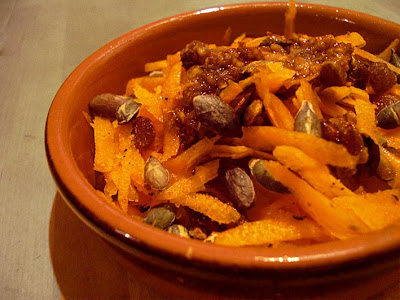 Now this week we're trying to detox a little - add a few vegetables back into the diet after a pretty unhealthy few weeks in New York. Having said that this recipe is inspired by a green salad that I ate on Broadway in a Japanese restaurant.. It had the most amazing ginger dressing - now that's an ingredient I hadn't considered as an ingredient in dressing before.

A simple carrot salad - improved by the addition of ginger - but alas - there was none in the house, so I used galangal root instead - which is similar to ginger but with a more intense heat and peppery taste.
Ingredients - two servings
4 carrots - peeled and grated
A handful of raisins
A handful of pumpkin seeds
A spoon of sesame seeds
Dressing
1 dessert spoon of white wine vinegar
1 serving spoon of olive oil
a thumb sized piece of galangal root - grated
1 teaspoon of honey
1 dessert spoon of Thai chili sauce - optional
1 clove of garlic minced - optional if you're not too keen on garlic
a pinch of asa foetida - optional
a pinch of salt
Freshly milled black pepper
a small pinch of turmeric

Pop your seeds on a baking tray under a hot grill for about 4 mins - keep an eye on them as they burn easily. They should start to pop when done. Add these seeds to the raisins and carrots in a bowl. Combine the other ingredients in a cup and blend with a fork - or if you prefer make it in a jam jar and shake it together - any remaining dressing can be stored in the fridge for a week or so.
Pour dressing over salad - toss and serve. Can be served as a side to many dishes - the galangal root/chili sauce gives it a hot kick, seeds are nice and crispy against the carrot sweetened with raisins.