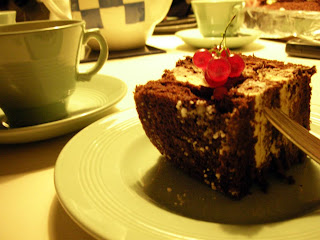 It was my fellas birthday and I had a whole day off work! I decided to spend the morning making him a cake, and not just any cake...
I adapted this recipe from Delias squidgy chocolate log. It is light (there is no flour in it at all) and very decadent, perfect for a birthday cake and it looks really impressive.
The chocolate mousse nearly turned into a complete disaster as when I added the egg yolks to the hot chocolate the whole thing went rock hard and I had to throw it all away. The second batch I let the chocolate cool a bit longer and only put in half the amount of egg yolks. It still went a bit strange but I persevered with the mixing and it was delicious in the end. 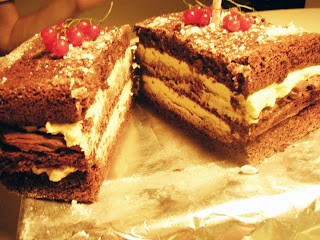 Ingredients:
6 large eggs, seperated
5oz caster sugar
2 oz cocoa powder
filling:
8 oz plain chocolate
2 large egg seperated (Delia uses both yolks but I couldnt make this work, I only used 2 yolk and 2 whites)
8 fl oz double cream, whipped until very thick (but not butter!)
other filling:
8 fl oz double cream, whipped until very thick, see above
topping:
icing sugar
red berries
method:
Start with the filling. Melt the chocolate in a bowl over a pan of hot water. Meanwhile, beat the two egg yolks in a very clean bowl with a clean beater until they are stiff. You should be able to hold the bowl upside down without anything falling away. When the chocolate is melted, take off the heat and let the bowl cool down until you can hold it comfortably. The chocolate should also be a bit cooler. Whip the egg yolk and add it to the warm chocolate. The yolk will cook in the chocolate and turn the whole thing quite stiff, don't panic! Keep mixing it. Fold the beaten egg whites in to the chocolate mixture. Don't beat it, fold it! Then fold in the whipped cream and continue folding until everything is nicely mixed. refrigerate this mixture for an hour or so until ready to use.
For the cake grease a large baking tray, line it with baking parchment and then grease that too. Whisk the egg yolks and sugar together in a large bowl until they start to thicken. Add the cocoa powder an whisk this in too. In a separate bowl, whisk the egg whites until they are stiff (see above). Add the egg whites to the chocolate mixture and carefully fold everything together. Don't whisk or beat as this will destroy the air bubbles and the cake will be totally flat and gross. Pur the mixture into the tin, and bake for 20-25 mins in a pre heated oven at 180c. When you take out the cake it should be springy and puffy and not too dark.
At this point, Delia turns the cake into a roulade, but I think a chocolate mousse cake is a bit more impressive.
I let the cake cool and then I cut it into three rectangles the same size (I used a ruler to measure exact thirds!). Then I spread half the mouse onto the first piece, followed by half the whipped cream. I topped this with the second piece of cake, and then spread that with the rest of the mousse, followed by the rest of the cream. I sprinkled some icing sugar over this and topped with some sharp red currents. This really added some dimension to teh flavours. If Iwas making it again I would probably add some red currents or strawberrys in a layer within the actual cake.
It was amazing! Light, rich, not too rich, contrasting with the sharp berries. Yum! Colm was very happy
Posted by L

He he! It was pretty good alright... Complicated but so worth it!