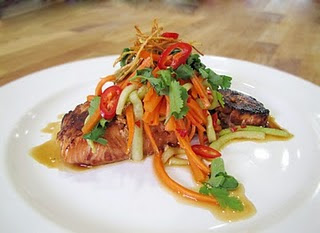 So this is my first proper cooking after finishing the course. I spent a good week eating mostly vegetables and drinking plenty of water. Then my wonderful friend Kate bought me a flight to Madrid for my birthday, so off I went to relax and soak up this beautiful city with it's wonderful art, architecture and tapas! The culinary highlight of the trip was a visit to The Mercado de San Miquel just off Calle Mayor. If you are ever in Madrid I urge you to check it out. It's housed in the old fish market. Under the ornate metal arches are housed vendors of every kind. You can stroll around collecting small dishes from an array of delectable treats. Everything from caviar, Spanish cheeses and ham, to churros and fantastical chocolates. There are great wines and prosecco for sale by the glass. I could have spent all day there, gently grazing. The best thing about Spain is the portions - allowing you to tailor your meals to just how hungry you're feeling - not a bad idea?


Back to the point in question. After completing my course I was hoping that all my new skills would transfer to my kitchen - with it's significantly more humble set up than the spacious Cooks Academy. This salmon yakitori was delicious when I prepared it during the course. Could I recreate at at home. The answer was a resounding yes - phew well that's money well spent so!

Tweet
It's the final countdown!
Monday
So this is the last post for this series. Can't believe it's the last week, though to tell you the truth I'm knackered and judging on today the rest of the class are pretty tired too. I won't start into my conclusions and summaries until the end of the week.
Today we made ice-cream in the manual method, even though there were a few ice cream machines on hand too. I'll see how it came out tomorrow. The rich chocolate ice-cream we made was just that - cream, sugar syrup, chocolate and some eggs! Licking the spoon was amazing, frozen it will be divine I'm sure. So any doubts about the fat content of ice-cream is long gone
We prepared a lemon tart, my pastry was a little dry and crumbly, must be brave and add more water. I'd even practised over the weekend, practice pastry! Didn't bake the case blind for long enough so it was a little soggy - all good constructive criticism.
Steak with Bearnaise sauce was up next, sauce Bearnaise requires plenty of whisking. The steaks meanwhile were cooked to perfection by my pattern and they were delicious - score! Though I forgot to add the chopped tarragon to the finished sauce. You can never read the recipe too many times it seems.

We got to sample the pork and chicken terrine that was made on Friday over lunch as well - now I can say I'm a fan of terrine, really nice recipe spiked with bright pistachios.
I called the afternoon demo - Masterchef afternoon - as two of the contestants favourite desserts were up, Chocolate fondants and Tarte Tatin. Chocolate fondants should have a slightly gooey centre and be served straight away. Tarte Tatin comes with serious burns potential due to the high volume of liquid hot caramel you'll be throwing around. You have been warned!
We were also shown how to bone, butterfly and stuff a leg of lamb, and prepare a salsa verde to serve with it.
Tuesday
The day of roasts. Now you know how a roast Sunday lunch with your parents is the best lunch ever. Well the second best lunch ever is 6 different roasts with your Cooks Academy class mates! We all prepared different roasts and sides today. Racks of lamb, rack of pork, lamb shanks, roast beef on the bone and we made moussaka (not too sure how that fits in?) There was also tarte tatin and thin apple tarts.
Every meat was also served with appropriate sides and a few big bowls of roast potatoes, Yorkshire puddings and gravy. I was in heaven. The meat was great quality and all very well cooked - aren't we all getting very accomplished.
I did manage to burn my first ever bechamel sauce - very embarrassing! I've made it many is the time before.

The afternoon lecture was from a butcher with over 50 years experience. He brought in an entire half pig and showed us the various cuts and demonstrated some of the most effortless and impressive knife skills I've ever seen. I learned a lot about how animals are raised, slaughtered, bred and processed. I didn't know that every carcass leaving the slaughterhouse has to be inspected and approved by a veterinary surgeon.
WE learnt some very important fundamentals on how the animal is treated prior, during and after slaughter relates to the quality and tenderness of the meat. You'll be pleased to hear that a happy relaxed pig will make for more tender meat!
When the entire pig had been divided up - there was very little waste. Skin and some big bones. In all there were four and a half trays of meat to one and a half trays of 'waste'. When the cuts of meat are being made there are small bits of meat (maybe the size of a small fist) that don't get used up - these bits of meat would go into sausages along with a lot of meat from the fore shoulder, not scrapings from the floor!
He did tell us that all pork in Ireland is raised indoor (the vast majority of it) which I didn't realise, as well as most chicken too. Not sure where I thought they were hanging out..... hmmmm that's embarrassing too!
I'd highly recommend attending a butchers demo like this as you'll really get an appreciation for the different cuts and techniques used, it's an incredible skill. I know I'm more determined to use some different cuts of meat in the future and to think about whereabouts they come from can determine how they are to be cooked. I'm loosing the power to articulate things now because I'm tired - will try to add more on the butchery section later!
Wednesday

Sole (flat fish) to be filleting. Now I found this easier than the round fish in week 1 - maybe because I'm more confident. The bones are found in a very definite area in the centre of the fish.
Crispy Sole was prepared by dipping in egg then breadcrumbs and lightly frying. These were beautiful served alongside some minty pea puree - a definite for the future. Though you get surprisingly little meat from a big flat fish. 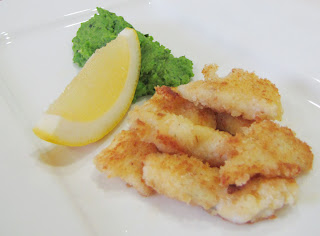 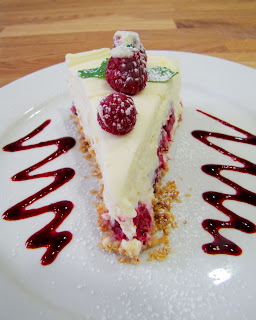 Also made in the class were tarte with pate sucre (very hard apparently) rhubarb meringue and more that I've forgotten but eaten!
First thing this morning we also had to make our pastry for Fridays exam - and I'm nervous! Haven't taken any exams in years - I'm likening it to stage fright, which I do get!
The afternoon saw us cover tempura batter, squid and rocket salad, calamari and finally an entire lobster - wow! It was a first for me - very tasty still not beating my Galway Crab Claws though! Now home to study for tomorrows theory test - I think if we fail this then we haven't been listening much - all common sense questions I hope.
Thursday
Was feeling pretty sick and rotten today - but came in because we had our theory exam. Cooked chowder, made bread, and practised our fish filleting. Had a bit of a feeling sorry for myself break down - handled very well by my partner and tutor - who sat me down and made me tea! Sorry guys  and thanks much appreciated.
Had a food costing lecture which was invaluable to anyone starting into a food business, including formulas to calculate what to charge for your product.
Afternoon was our theory exam - a little harder than I had expected. Included theory, health and safety, ingredient recognition and menu planning.
Home to bed
Friday
Practical Exam day. We had to prepare lemon tart and sea bass with beurre blanc, roasted potatoes, carrots and spinach. I bet any professional are laughing at this now. Proved a pretty busy morning for me - though thankfully avoided any major catastrophes. I did spill some of my tart as I put it in the oven - but I got a slice out for presentation ok. Made me think a lot about working as a professional and the pressures that kitchen staff must be under. PRESSURE!! I held up fine though - thank god I didn't have to do this yesterday.
By lunchtime I was glad to be finished. We all ate our sea bass and swore never to make lemon tart again!

There was a presentation with glasses of prosecco. We all received our certs - of varying levels - distinction, merit and pass! I won't tell you what I got - you'll just have to guess. With that we said our good byes to our tutors and went off for a few well deserved pints.
Somehow I feel it's a bit too soon to write  conclusion to the course, I feel a little too close to it to stand back and anaylse my experiences. There is no doubt I learned a hell of a lot of skills, and picked up heaps of valuable advice on all subjects that we covered. Always rest your meat - wrap fresh herbs in kitchen towel and put in tupperware in the fridge - how to fold a meringue without breaking it - I could go on and on.

I have an extensive shopping list of things I need to buy for my kitchen (prob not a good thing) I will confidently tackle fish, shell fish and sauce unlike before. I have cooked far more desserts than I have in the last 3 years, I'll confidently take on any kind of sweets from now on.
I'm pretty happy with the photos that I've taken of the food we've produced, though I at no time wanted to get in any ones way and impare their enjoyment of the course, so for those reasons there's maybe a photo or two less than I would have wanted. 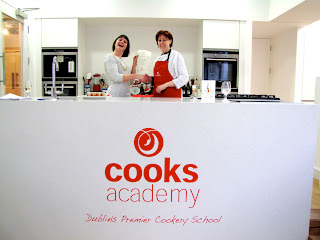 Over and out!!!
Posted by Lu 2 comments

Tweet
Irish Foodies Cookalong
So long I have tried and failed to participate in an Irish Foodies cookalong. Today I have succeeded in participating, though it may be conceived as cheating, I'll submit it anyway. Our best previous attempt was me and Lola trying to enter us the Christmas cookalaong. Some mince pies were made - then stew went in the oven whilst we got pretty drunk, then turned the oven off and went to the pub - total cookalong fail.
So today I made these creme brullees - in Cooks Academy I'll admit so that's possibly where the cheating element comes in. I did however match them with nice romantic napkins and seasonally inappropriate raspberries. At least I'm not down the pub already!!
Posted by Lu 2 comments