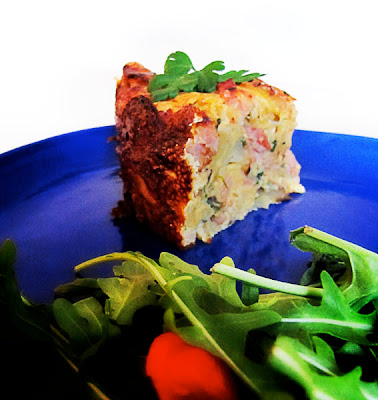 My photo archives show me some very tasty dishes I have cooked over the last year - but due to circumstances they never reached the pages of this blog in sufficient time - and I've forgotten how exactly how I made them, I have a good idea though. So no longer will these photos lie on my hard-drive unloved and unseen - the will be released onto the pages of our blog - and if anybody wants further details - just ask - and I'll do my best to remember!
Not a recipe
I guess I mandolin-ed  a few spuds – chopped some leek – cooked the leek in some butter with thyme and garlic – then added the spuds and cooked until they were soft. Then when this was all soft and golden and delicious – I whisked up some eggs with a little milk and seasoning  - then I chucked these over the leek and suds allowed to cook on the heat for a while. I probably then grated some cheese on top – then banged it under a hot grill which made it go all puffy and crisped the top,
Then I dressed some rocket leaves with balsamic vinegar and olive oil and shaved some parmesan and tomatoes. There appears to be some bacon in there too – that would have been fried up just before adding in the leeks I guess.There may well have been some chives in there  - or parsely

The one thing I remember for sure was – that is was delicious. Oh yes! It would have been a shame to let this recipe slide past just cause I’m forgetful
Posted by Lu

This looks amazing as always!!!
I actually want to cook it straight away! How do you get such a nice appearance my omelette's never look that good ? :)