Tweet
All the Kings Veg
The aforementioned Fruitfellas box of goodies arrived and we found we suddenly had what seemed like several hundred red and yellow peppers in the fridge and in the box, and we needed to do something with them. The communal fruit/veg bowl also harboured half a butternut squash that was approaching the end of its time on earth. Something needed to be done. Fast.
So of course, we made soup, and very delicious it was too. 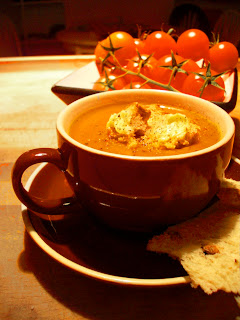 Roasted pepper and butternut squash soup
1/2 a large butternut squash
6 red and yellow peppers
handful cherry tomatoes or 2 normal tomatoes, quartered
1 head garlic
about 1 pint light stock (chicken or veg)
Olive oil
salt and pepper
Peel and slice the squash and place in your largest roasting tin along with the tomatoes and the deseeded peppers which have been cut into quarters. Bash the head of garlic so that it comes apart but don't peel the cloves. Add them to the tin and drizzle everything with olive oil and season with salt and pepper.
Roast in the oven at 200c or about 40 mins or until the squash is totally soft and the peppers are browned.
Transfer the vegetables to a saucepan. Peel the roasted garlic cloves and add these in too. add in the stock until it just covers the vegetables in the saucepan. Using a stick blender, whizz everything together until smooth. If its too thick, add a bit more stock until you get to the consistency you like.
Season to taste and serve with !
Posted by L

On a real soup buzz at the moment so I will definitely be trying this one out. Oh, how I love thee Butternut Squash!

Hey Aoife - this soup was so so goood, nice sweetness to it. Butternut squash is great in soups what did we ever do before it!