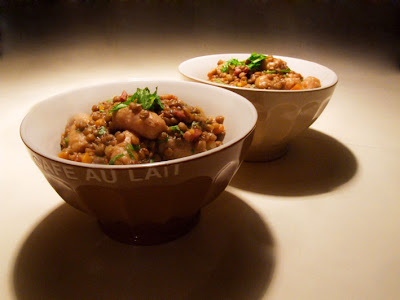 Nigel Slater, I think I love you. Seriously, I love Nigel. Hes better than all of them, Jamie, Anthony, obviously, Hugh Fernley Whathisface, and even though it pains me to say it, he is better than Delia and even my idol Nigella. Everything he does is so amazingly simple and delicious, and he has an uncanny way of matching flavours and textures in the most basic ingredients so that his recipes sometimes look boring on paper but always work out spectacularly. His food is clean and frugal, but somehow at the same time luxurious and he uses way less fat and cream than Nigella, who, as fabulous as she is can go a bit over the top sometimes.
So I try and cook something from Nigel's Observer food column as often as possible, we've done his super delicious Lemon Posset before. A few weeks ago, Lu and I made this. True to form, it was amazing. AMAZING. You have to cook it. We stuck religiously to the recipe so I have just copied and pasted it from the observer website below. The pic is ours though.
Sausage and Lentil Supper
I make bean and sausage hotpots for winter weekends, leaving them to putter away in a slow oven until everyone comes in, freezing and begging to be fed. During the week I'd like to come back to that sort of thing, too, so I use this quick version. The parsley is crucial, as is a good meaty sausage. Serves 4.
2 tbsp olive oil
120g streaky bacon, diced
1 onion
1 large carrot
a rib of celery
300g green lentils
1 litre chicken stock
2 bay leaves
8 plump pork sausages
chopped parsley
Warm the oil in a deep, heavy casserole. Put the bacon in and let it cook over a medium heat so it colours lightly. Meanwhile, peel the onion, chop it finely and add to the bacon. Cut the carrot and celery into rough dice, and stir them in, letting them soften a little. Don't let them colour. Tip in the lentils, pour in the chicken stock, then tuck in the bay leaves and sausages, cut into short lengths if you prefer, and bring to the boil. Turn down the heat so the liquid simmers gently, season, then leave it for 30 minutes, stirring from time to time. Check the seasoning (I like it peppery), and stir in a handful of chopped parsley.

Isn't he lovely?
Posted by L